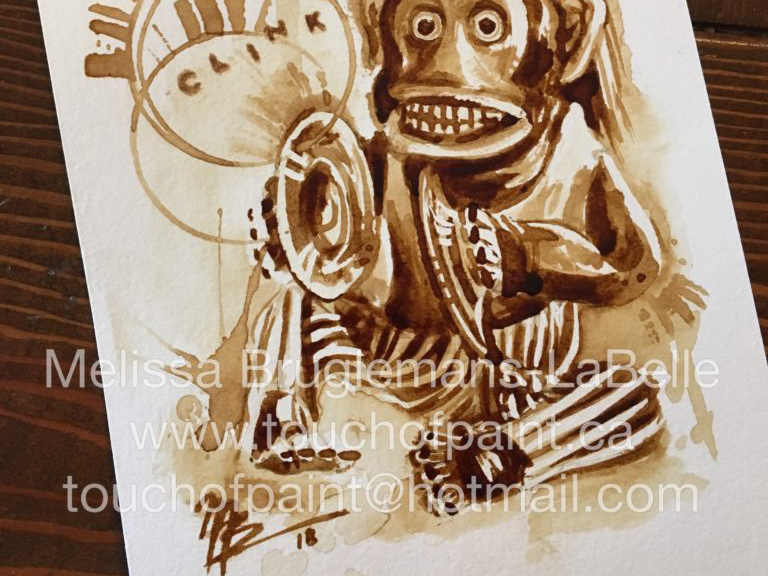 ‘This is my Circus and those are my Monkeys.’

Scene: sitting at the kitchen table with my two little boys eating Mac n’ Cheese
Me: So boys, what should Mommy Paint now?
Ben (3 Years): A Monkey!!!
OooEeeAhhh! OooEeeAhhh!!! (Clapping his hands together and jumping around)
Nic (5 Years): And then the Big Baby Comes to puts you under arrest and puts you in the Dungeon FOREVER! BwaHaHa!!!
Me: Okay???
The Backstory: A week prior we sat down as a family and watched Toy Story 3. One memorable moment that best stuck into my children’s mind was a scary looking wind up musical monkey who attacked Woody violently with his cymbals. This cymbal playing monkey is best known as the “Musical Jolly Chimp” or “Charlie Chimp” and is not only one of the most recognizable mechanical toys in existence but is also to many one of the creepiest. It was first created in the early 1950’s as a sort of homage to the old street organ grinder’s monkey. Since then it has been a staple in many movies and marketing gimmicks where its looks and actions has changed due to many different companies take on the original Musical Jolly Chimp character. Its first recorded movie debut was in fact the opening scene of Rebel Without a Cause where James Dean lies drunk in the middle of the street and becomes friends with the little fellow.

It’s easy to say, that this weeks Studio 52 painting came quite easily to me with a little help from my boys and the craziness that is my home life (Day in and Day out). So much so that the quote “This is my Circus and those are my monkeys.” Come to mind.
My “3” Boys are ABSOLUTELY INSANE (Yes, I am including my husband in this). My once peaceful clean and somewhat organized home is now completely turned upside down. I’m behind on everything, have zero time to myself and I haven’t had a solid 4 hours sleep in …. well … FOREVER. It is the perfect example of a Monkey House.
Even though it sounds sort of harmless, no one should want to end up in the monkey house. According to the Oxford Dictionary the term Monkey House initially referred to the building in a zoo that houses all the monkeys. However, By the early 20th century it was referring to certain buildings housing humans including Parliament or Brothels. It has also been used as slang for psychiatric hospitals and prisons*.
*Take note at the CLINK, CLINK, CLINK and the crazed look in the monkeys eyes. Charlie is living in a mad world, he’s in the monkey house. Time to Lock him up in the “Clink” and throw away the key.
As I said this coffee painting of Charlie Chimp was rather an easy and fun piece for me to work on this week. Almost opposite from the struggle I had came across the previous week with “Under Pressure” 1. I made a point of being generous with the masking fluid and it helped to kept certain areas free from over painting.
2. I also played with a few different techniques and tools. For example I used cotton swabs instead of brushes in some areas which gave a lovely cloudy look to my coffee stains. I also used rubber stamps (the CLINK letters) I figured if the rings from a coffee cup were interesting the why not give stamps a try. And WOW am I’m super glad I did. This is something I’m defiantly going to keep trying.
Thanks again for visiting the Studio 52 Project and Remember to tune in the fallowing weeks to see what I paint next. If you are interested in purchasing prints or the originals please feel free to email or private message me at any time.
Be sure to leave comments/feedback. I want to hear what you think.
Sincerely, M 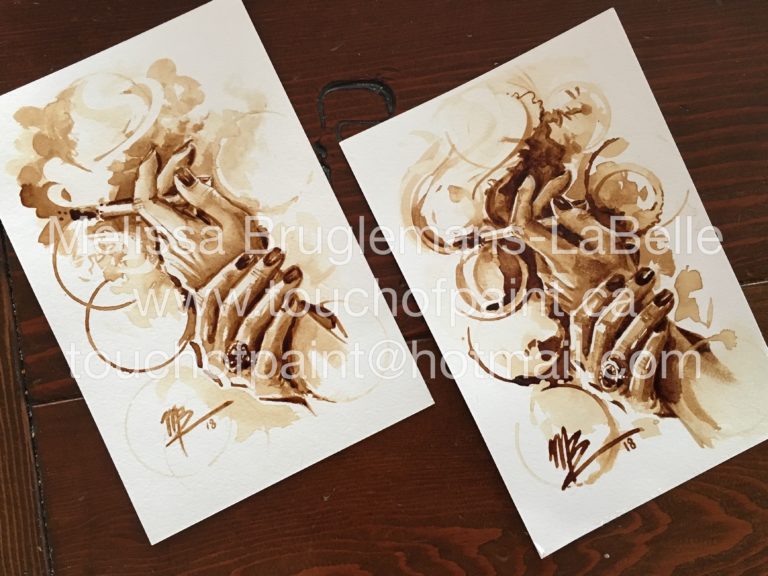 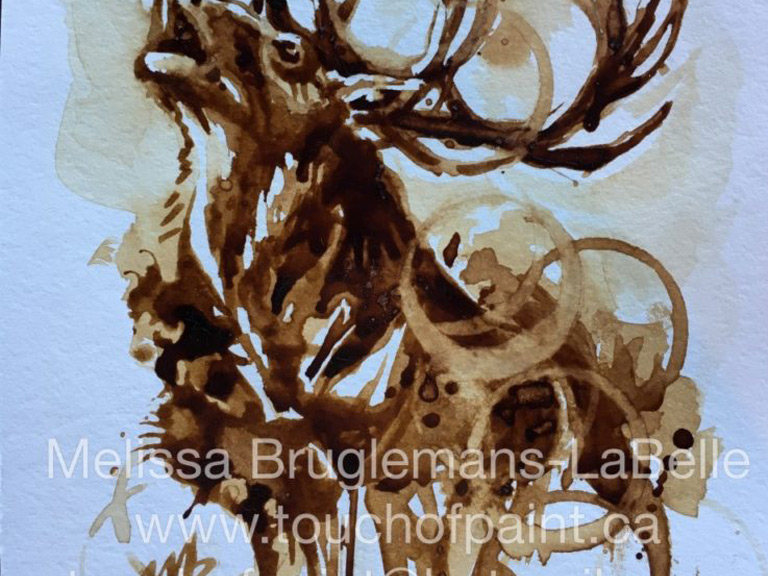